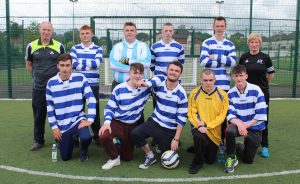 Tullamore, Athlone & Mullingar CTC’s played out a very entertaining & enjoyable 5 a side competition recently and it was the Athlone side who were victorious on the day.
Tullamore CTC remained unbeaten in the group stages after an impressive comeback against Athlone where they came from 3 down to eventually draw the game 4-4.
In the final Athlone made full sure another comeback wasn’t on the cards as they held out for a 3-0 victory.
A special thanks must go to the Aura Leisure Centre for the use of their facilities, Offaly Sports Partnership for sponsoring the trophy and Cafe Inspire in Tullamore CTC for providing the catering.
What the players had to say..
I loved playing soccer with my CTC friends against the other CTC’s, it was great craic – Lee
It was a nice change from the usual training centre work – Jason
It was a good day, I really enjoyed it and the people were sound – Michael
It was a great day out of the centre – Patrick